Antonio De Curtis, a.k.a. Totò, was one of the greatest Italian comic actors of all time and is considered a symbolic actor of Italian cinema. Nicknamed the ‘prince of laughter‘, due to his noble titles, he was the mask par excellence of the Italian commedia dell’arte. He was so good that he was compared to world monsters such as Charlie Chaplin and the Marx Brothers.

As unfortunately happens to true geniuses, the greatness of Totò’s immense talent was not understood at all during his lifetime. Film critics repeatedly panned him and rarely expressed positive judgements on his artistic career.

Fortunately, his talent was revalued after his death, so much so that today he is considered the greatest and most popular Italian comedian ever.

Sad and bitter, in this regard, is a sentence of his in which he expressed his dissent and regret: 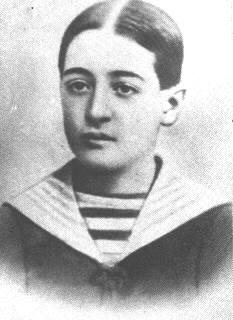 Antonio de Curtis, called Totò by everyone, was born from a clandestine relationship between the Marquis De Curtis and Mrs Anna Clemente, in the Sanità district of Naples, on 15/2/1898, and died in Rome on 15/4/1967.

Even as a child Totò showed extraordinary artistic talents. In the streets, little Antonio De Curtis spied eccentric people and tried to imitate them at school, entertaining his classmates with little acts. These remarkable talents immediately worried his mother, who considered it dishonourable to have an artistic son. She therefore tried to convince him to become a priest by making him an altar boy. Fortunately, his considerable talents soon emerged during family plays and, with the consent of his relatives, he began performing in Neapolitan theatres, where he met Eduardo and Peppino De Filippo.

Antonio De Curtis’ career, however, took off after he moved to Rome, i.e. after Marquis Giuseppe De Curtis recognised Totò as his son, married his mother and moved the whole family to the capital.

After a brief stint in a theatre company of bad actors, which was nevertheless important for his career, as it was his first contact with the commedia dell’arte, Totò decided to perform on his own. The first to believe in his talent was impresario Jovinelli, owner of the Roman theatre of the same name. Totò received discreet public acclaim, but the definitive one came when he performed at the Sala Umberto I theatre. From that moment on, the step was short and he also became known nationally.

His success grew and, at the same time, so did his success with women that he was nicknamed ‘womanizer’. During this phase of his life, Totò had numerous adventures until he saw a photo of Liliana Castagnola, a constant subject of the social chronicles of the time. Totò immediately fell in love with Castagnola and, taking advantage of her presence at a theatre performance, won the girl over. A real and great love story was born between the two. Unfortunately, however, a great deal of jealousy soon broke out in the couple, fuelled by the social chronicles that insinuated betrayals by both of them when they were away on business. This situation led to the breakdown of the relationship and Liliana’s subsequent suicide in 1930.

Totò was shocked to find the corpse of his beloved companion and decided to bury the body in the De Curtis family chapel. Totò, full of remorse for not having understood her to the end, decided to keep the handkerchief smeared with rimmel that Liliana probably used to dry her tears before swallowing a whole tube of sleeping pills. Furthermore, Totò promised himself that if he had a daughter in the future, he would name her Liliana, in his honour.

A line by Totò dedicated to Liliana Castagnola, found in the poem Balcune e llogge:

She's dead, she's gone! Why don't I wear mourning? I answer 'with people I laugh but inside my heart it's all different!

After a few years, Totò had a daughter by Diana Rogliani, whom he named Liliana. His relationship with Diana caused quite a stir at the time, as the two met during a tour in Florence and the girl was still 16 years old. Totò and Diana Rogliani got married in 1935 and remained married until 1939. Despite being separated, the two decided to live together until their daughter Liliana reached the age of 18. The agreement was not respected by Diana. 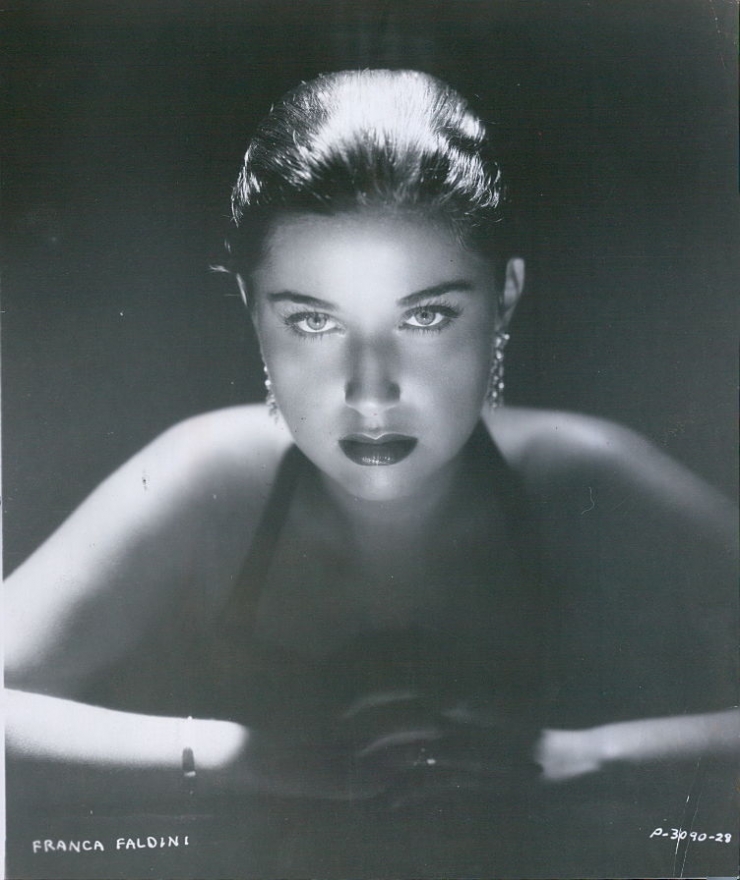 In 1952, spring broke out in Totò’s heart, as he wrote in a letter to actress Franca Faldini, after seeing her on the cover of a magazine. Totò, heedless of the 33-year difference between them, phoned Faldini and invited her to dinner. The young woman accepted and after a month the couple announced their official engagement, creating yet another stir. Their story lasted until Totò’s death, and the two never married. From Faldini Totò had a prematurely born son, who died after a few hours. Totò, destroyed by grief, shut himself away for weeks and only his love for cinema saved him and led him to react.

In 1957 Totò had a viral bronchopneumonia and it was also in that year that the first signs of the eye disease that would lead to his semi-blindness began to appear. He was forced to wear a pair of dark glasses, which he only removed on set. Although he could hardly see anything, Totò showed no hesitation when shooting scenes on set. In this regard he claimed that as soon as he heard the clapperboard for the start of the action he saw everything, as if by nervous effect.

Totò was a theatre actor in about 40 performances, a film actor in 97 films, a television actor in nine TV series called TuttoTotò and participated in nine advertising carousels and seven others that were never broadcast. His television appearances in the programmes Il Musichiere and, above all, in Studio Uno with Mina are well known. Totò wrote 64 poems, 40 songs and performed 36 of them.

Totò’s tomb is located in the Cemetery of Santa Maria del Pianto in Naples. His body was laid to rest there on 17 April 1967.

Totò’s grave is still much visited by many Neapolitans and foreigners who pay homage to him, even leaving him cards, sweets and flowers.

In front of Totò’s tomb is a plaque with the text of the poem ‘A Livella’ carved into the marble. Unfortunately, in 2009 the grave was vandalised, but fortunately the police were able to find the looted coat of arms very quickly.

During the days of the celebration of San Gennaro, people celebrate and pray for the miracle of the liquefaction of blood to take place. On the three feast dates, the vitreous balsamari are displayed to the faithful during a large religious ceremony in the presence of the city authorities.

The statue of San Gennaro is at the centre of a solemn procession to Santa Chiara on the Saturday before the first Sunday in May. 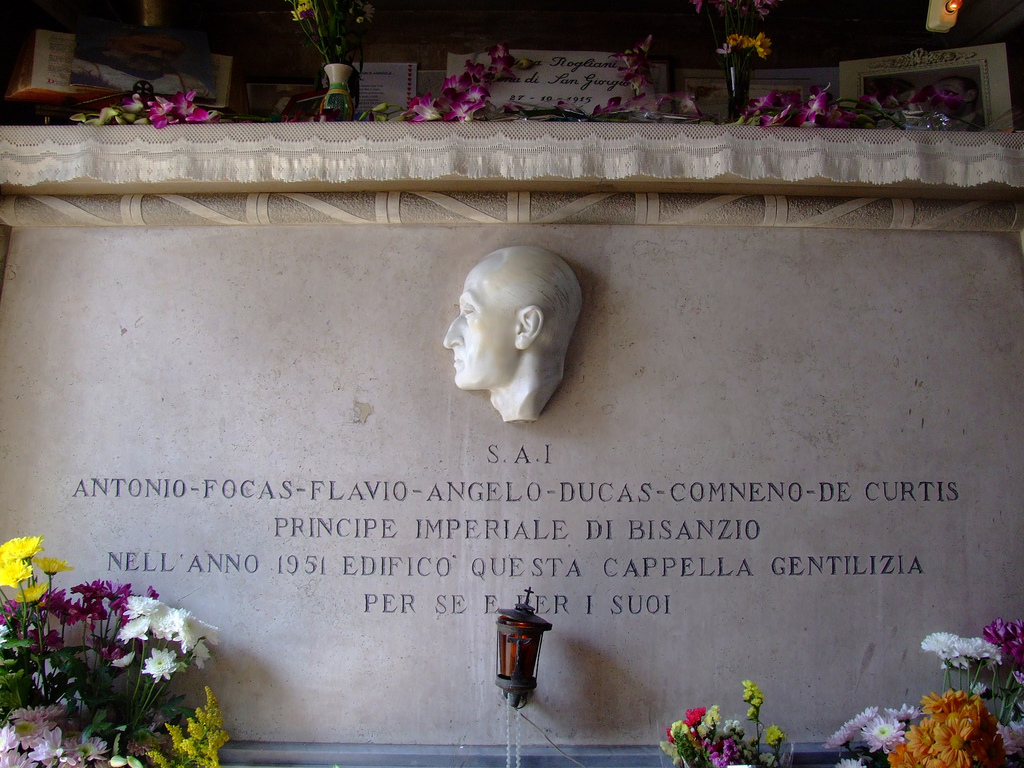