Spaccanapoli is the name the Neapolitans use to refer to one of the city's main streets; a long road that bisects the ancient city of Naples, from north to south. It is a perfect straight line that can be seen from various points in the city including the Vomero, Castel S. Elmo and Piazzale di San Martino.

Where is Spaccanapoli located?

From a toponymic point of view, Via Spaccanapoli does not exist. Rather, it is a long, straight axis encompassing seven streets that can be walked in both directions. Spaccanapoli starts at Via Pasquale Scura, the highest part of the Spagnoli quarters, and continues through the streets of the historic centre: Via Maddaloni, Via Benedetto Croce, Via San Biagio dei Librai, Via Vicaria Vecchia, Via Forcella, Via Giudecca Vecchia. The latter street is located in the heart of Forcella and is the street that continues after the intersection with Via Duomo, which has recently become the Museum area. The most representative street of Spaccanapoli is Via San Biagio dei Librai, which cuts through Via San Gregorio Armeno, the famous street of nativity scenes and tourist destination par excellence. 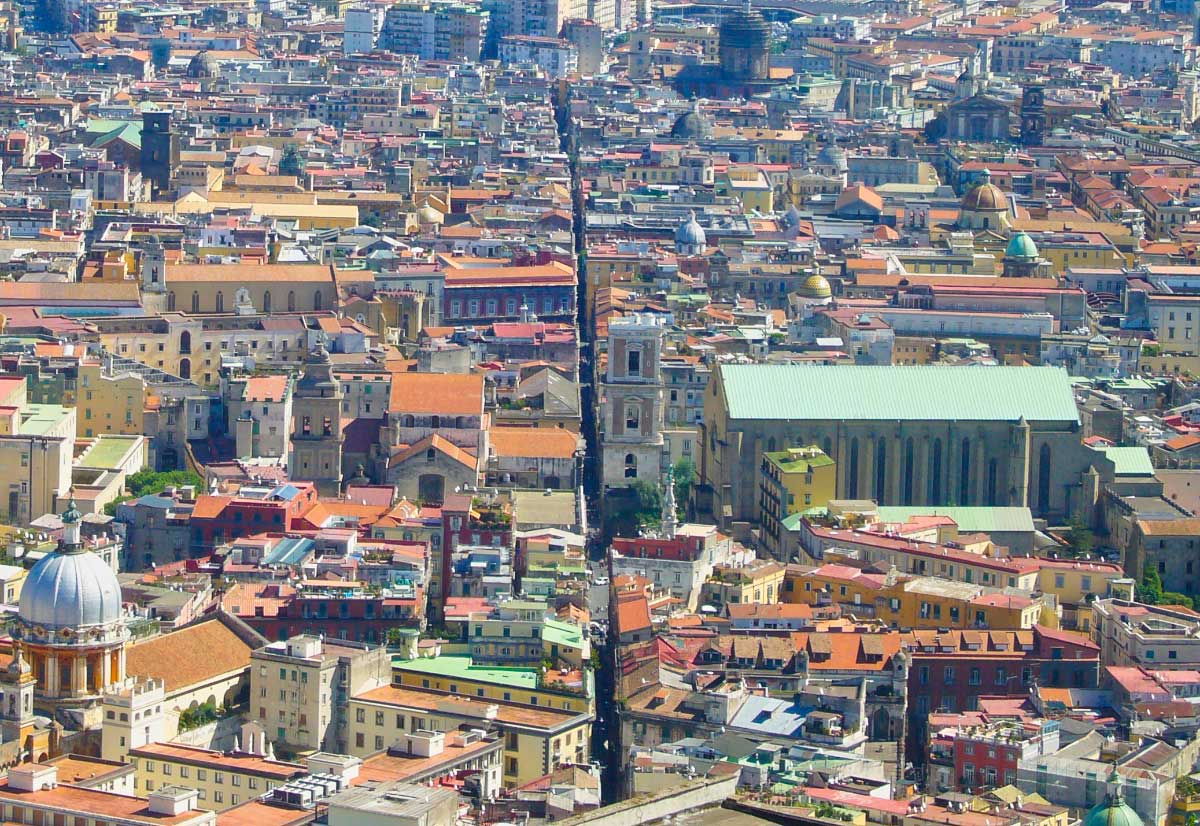 Spaccanapoli is overlooked by numerous churches, religious convents and aristocratic palaces that make up a large part of the marvellous historical and artistic heritage of the city of Naples. It is a veritable open-air museum that UNESCO has declared a World Heritage Site.

Along this marvellous open-air route you can admire Palazzo Gravina, the Immacolata Spire, the Basilica del Gesù Nuovo, the Monastery of Santa Chiara and the Cloister of the Clarisse, a magnificent example of how Angevin Gothic can coexist with the purest Neapolitan Baroque. You can also admire the Basilica of San Domenico Maggiore, Palazzo Filomarino, the Sansevero Chapel, which contains the marvellous sculpture of the Veiled Christ, and the Monasteries of Saints Marcellino and Festo, dating back to the 8th century. From the cloister with the garden, you can enjoy the wonderful view of the Gulf of Naples. Continuing along Spaccanapoli you can admire the Duomo, where the prodigy of the liquefaction of the blood of San Gennaro takes place every year, the Church of San Paolo Maggiore, the Underground City (Napoli Sotterranea), the Church of San Gregorio Armeno, with its spectacular carved and decorated wooden ceiling and the beautiful cloister. 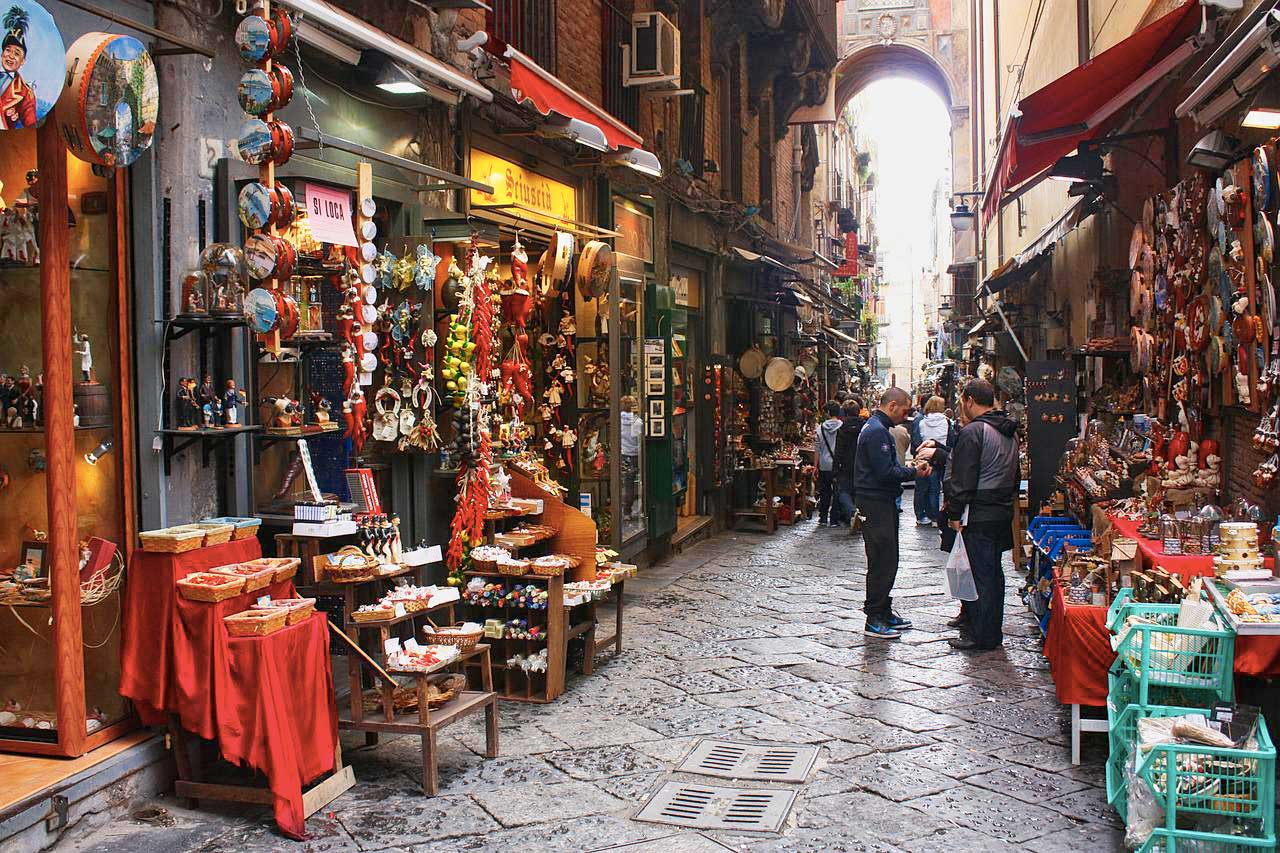 How do you get to Spaccanapoli?

To get to Spaccanapoli by car, take the Naples ring road and exit at Doganella.

Proceed to Piazza Carlo III, cross Corso Garibaldi, Corso Umberto and Piazza Bovio. From here, take and walk along Via Sanfelice and then Via Monteoliveto, the point of arrival. You can park your car on this street. On the right you will find Piazza del Gesù, and so you are in Spaccanapoli, where the obelisk of the Immacolata stands out.

On the left, cutting through a few small streets, you will find Via Toledo, the ideal street for luxury shopping.

To get to Spaccanapoli by train you have to reach Piazza Garibaldi. Then you have to take the metro line 2, until Cavour stop, and then change and take line 1, and get off at Dante stop.

Once on the surface from Piazza Dante you have to get to via Toledo and after a few steps you will cross via Maddaloni (and then you are in Spaccanapoli).

The nativity scenes of Spaccanapoli

Spaccanapoli is famous as the street of nativity scenes and is a tourist destination par excellence.

Along Via San Biagio dei Librai, Via San Gregorio Armeno intersects, a place of excellence for crafts made in Naples. Here, in the shops, you can admire and buy cork, wood and papier-mâché nativity scenes and handmade terracotta shepherds.

According to some scholars, the birth of the nativity scene, attributed to St Francis of Assisi, took place in Naples in the 4th century, when Pope Liberius (352-366) had a manger with the Child displayed for the first time.

It was in the Greek period that the tradition of offering a statuette, at that time to the goddess Demeter, was born; this tradition was renewed over the centuries through a popular art rich in suggestion and faith.

The greatest splendour of this art was reached in Naples at the end of the 17th century, when this tradition became a true artistic activity. The craftsmen painstakingly reconstructed the life of the city, i.e. its customs and traditions. For this reason, ordinary people began to be included in the crib. For example, a statuette from a few years ago is dedicated to the ‘disgrace’ of football player Higuain, who left the Napoli team to join his rivals Juventus.

The nativity scene in the culture and tradition of Naples and Spaccanapoli is divided into three different moments. The first is the apparition of the angel and the announcement to the Virgin Mary. The second is the birth of Jesus and his adoration. The third moment, called ‘diversorium’, includes scenes inspired by scenes from Neapolitan life.

This tradition belongs to all social classes and was also extolled by the great Eduardo De Filippo in his famous ‘Natale in casa Cupiello’.